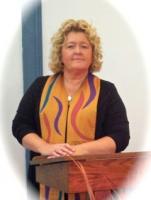 Carie joined UUCC in August, 2009. Carie brings with her a spiritual practice of creating deep meaning in everyday life experiences, a compassion for all of humanity, a commitment to greater equality and justice, and passion for liberal religious faith communities. Carie attributes her warm and engaging personality to growing up in South Dakota.

Carie was raised in “a typical mid-western Lutheran family.” She moved to Massachusetts in 1986 and settled into a career in social services on Cape Cod. Like so many others Carie felt she had found her spiritual home when she experienced her first Unitarian Universalist service.

As a Community Minister, Carie developed a mutual mentor program where women were supported and empowered to find spiritual and emotional balance so as to reach beyond the daily challenges of single parenting, divorce, poverty and domestic violence. Drawing on this mutual mentoring model, Carie facilitated the creation and implementation of a Congregation Based Community Ministry with the local Head Start programs in Marshfield and Plymouth.

As the Ministerial Intern with the humanitarian rights organization, Unitarian Universalist Service Committee [UUSC], Carie was instrumental in creating connections and building bridges between the humanitarian work of the UUSC and the spiritual lives of congregations and individuals within the denomination. Her work culminated in the publication of four UUSC Covenant Group Modules.

At the heart of Carie’s ministry is a commitment to building interfaith relationships and community partnerships.  As an active leader in the Augusta and Winthrop interfaith clergy groups, she has sought greater interfaith presence in the community by leading a silent march to Occupy Augusta camp, co-organizing MLK events, and participation in a 911 Memorial service.

During her ministry with UUCC Carie has engaged the congregation in strengthening and/or building community partnerships with St. Marks church, Maine Migrant Health Program, our Muslim neighbors and the Wabinaki people.

Carie has served as a board member for the Religious Coalition Against Discrimination (RCAD) since 2010. Her commitment to same-sex marriage is evident in her leadership with the RCAD Augusta clergy cluster.  Whether it be a vigil, a film screening, speaker forums or interfaith services, Carie knows how to draw out the faith community to engage issue of LGBTQ justice. 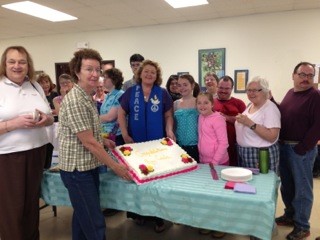 Carie is the parent of two adult sons, Justin and Michael. During her spare time she enjoys kayaking, riding bike, trips to Cape Cod and South Dakota, “lingering” and “nesting,” reading spiritual memoirs and just hanging out with friends and family.

Rev. Carie also keeps a personal/private Facebook page. If you have requested to be her friend, please do not feel slighted by her decline or unresponsiveness, instead take a minute to friend her at Rev. Carie Johnsen.

Minister's Hours are listed on the Home Page, in the Flaming Chalice, and in the Sunday Announcements.